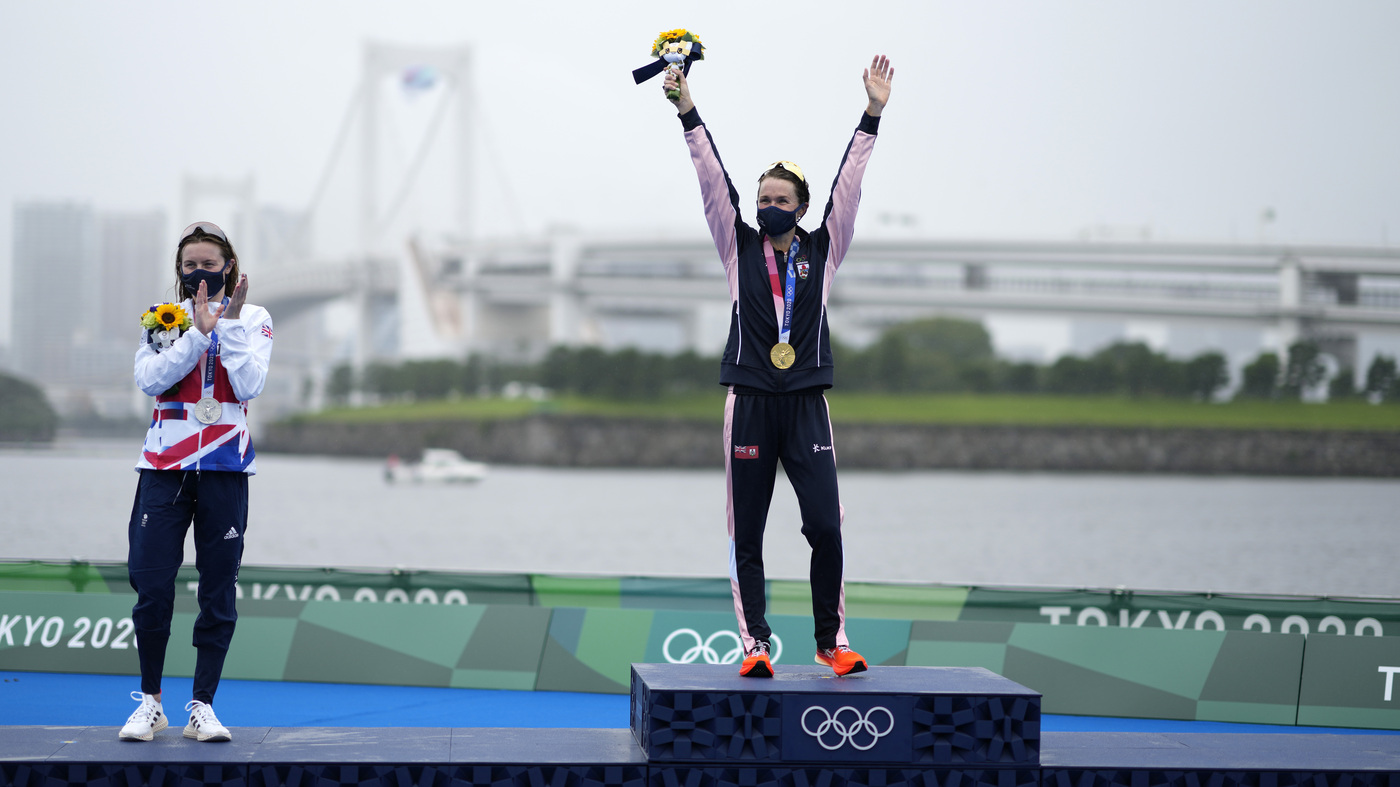 Gold medal winner Flora Duffy of Bermuda (center) celebrates her win in the triathlon on Tuesday, next to silver medalist Georgia Taylor-Brown of Great Britain.

Gold medal winner Flora Duffy of Bermuda (center) celebrates her win in the triathlon on Tuesday, next to silver medalist Georgia Taylor-Brown of Great Britain.

TOKYO — With a population of just 63,000, Bermuda has become the smallest nation or territory to win an Olympic gold medal.

On a drizzly morning in Tokyo, Flora Duffy, 33, clinched the victory for the British island territory in women’s individual triathlon – a grueling race made up of open-water swimming for nearly a mile, biking almost 25 miles and running 4.6 miles.

“Flora Duffy was already Bermuda’s golden girl before she set off on the Olympic women’s triathlon tonight, but she is now simply solid gold after destroying a world-class field in Tokyo,” local newspaper The Royal Gazette gushed after her victory.

Duffy is one of two Bermudian athletes participating in the Tokyo Olympics. The remote set of islands in the middle of the Atlantic Ocean is more than 600 miles from the closest land mass.

Duffy’s win is all the more impressive because she battled back from multiple injuries, including a foot issue that took her out of competition for a full year in 2018-2019. In Nov. 2020, she said she was also dealing with knee inflammation.

Flora Duffy of Bermuda leads during the women’s triathlon competition on Tuesday in Tokyo.

“I am so thrilled I could execute, and yeah, I achieved my dream of winning a gold medal, but also winning Bermuda’s first gold medal,” she said. “It’s bigger than me and that’s a really cool moment.”

“I guess it was pretty much like almost the perfect race for me,” she added.

The Bermudian came out of the swimming portion in 6th place, then quickly caught up to the leaders in the biking part of the race. She traded the lead a few times during the bike with the silver medalist, the U.K.’s Georgia Taylor-Brown, and bronze medalist, Katie Zaferes from the U.S.

Duffy pulled away on the run and ended the race more than a minute ahead of her closest competitor, with a time of 1 hour, 55 minutes and 36 seconds.

The only other medal Bermuda has ever won was in 1976, a bronze, in men’s heavyweight boxing.

Next post ‘Holy moly!’: Inside Texas’ fight against a ransomware hack
Close
Menu