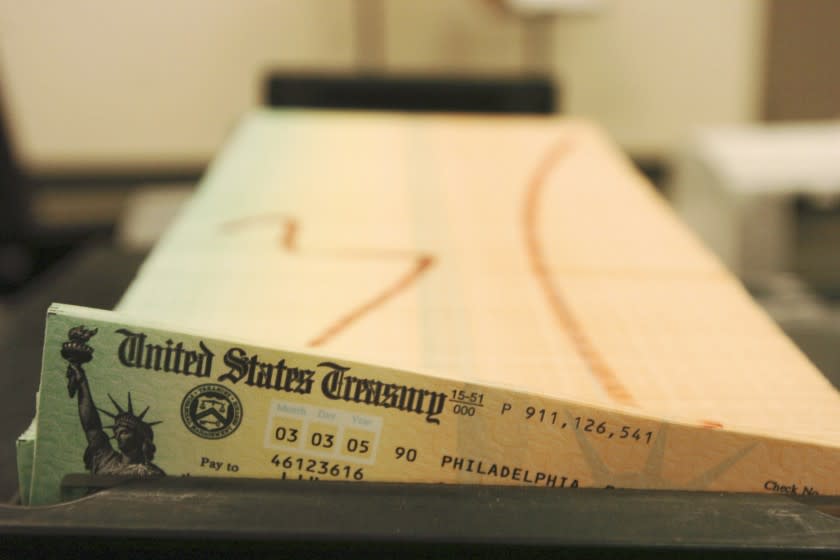 
Tens of thousands of Social Security Administration employees began work Monday with the sense that a new day was dawning for themselves and the program’s more than 64 million beneficiaries: A Trump-appointed commissioner who had undermined its mission while picking fights with its workforce had been fired after two years in office.

Andrew M. Saul exited snarling. Upon being informed of his ouster Friday, Saul insisted that his firing was unconstitutional and threatened to sue. (Biden had asked for his resignation, and when Saul refused, he was fired.)

[Saul] came in not knowing anything about Social Security, and that should disqualify anybody.

Reportedly, he tried to log into his agency administrative account Monday from his upstate New York home, only to discover that he had been locked out.

President Biden’s firing of Saul removes one of the chief impediments to progress in making this all-important social program even better for workers, their dependents, and those with disabilities by increasing and expanding benefits and demolishing administrative obstacles to gaining benefits.

Those changes rank high on the policy platform of Democrats in Congress, led by Rep. John Larson (D-Conn.), Sen. Elizabeth Warren (D-Mass.) and many others. Their program would increase benefits for all retirees, improve cost-of-living increases by changing the inflation formula, and raise the minimum benefit for the lowest-income households.

The campaign for improvement requires a knowledgeable and committed commissioner at the forefront, and Saul was anything but.

Saul’s qualifications for the job seemed to go no further than his experience as an executive at a couple of women’s garment firms and as a fundraiser for George W. Bush’s 2004 presidential campaign.

He also had been a board member of the right-wing Manhattan Institute, which proposed aggressive cutbacks in Social Security benefits, arguing in part that the program unfairly transfers wealth “from the poor to the wealthy.” (In fact, the exact opposite is true.)

“He came in not knowing anything about Social Security,” Nancy Altman, president of the advocacy group Social Security Works, told me, “and that should disqualify anybody.”

His acting replacement is Kilolo Kijakazi, a former fellow with the progressive Urban Institute, whom Biden appointed on Inauguration Day as deputy commissioner for retirement and disability policy.

Saul’s departure leaves a mountain of unfinished work for his successors. The most immediate task is to develop a reopening plan for the program’s more than 1,200 field offices, which have been shuttered since March 2020 because of the pandemic.

The White House had given the agency a deadline of next Monday to produce a plan.

There’s also the imperative to reverse Saul’s executive policies promptly. Saul’s hostility to the disability program was reflected in a host of punitive regulations imposed on or proposed for its beneficiaries.

Last year, Saul proposed to take some disability appeals out of the hands of the agency’s administrative law judges, who are immune from political pressure, and turn them over to its appeals judges, who are political appointees — and who have no experience actually conducting eligibility hearings.

Saul also proposed to increase the frequency of medical reviews for many disability recipients from every three years to every two years, subjecting them to a complicated and burdensome process that advocates said served no purpose, since there was no evidence that the system was overlooking recipients ready to return to the workforce. The proposal was withdrawn by Biden on Jan. 22.

“There was a mindset that everybody’s committing fraud,” Altman says, “that you can’t trust people who are getting disability.” In fact, disability benefits are hard to claim, and fraud rates are low.

The morale of the Social Security agency workforce plunged during Saul’s tenure. Upon taking office, he imposed a take-it-or-leave-it union contract that canceled benefits such as vision care and took away workers’ control over working conditions. Among his more senseless and insensitive policies was the abolition of the program’s 6-year-old telework initiative.

About 25{8a924211cc822977802140fcd9ee67aa8e3c0868cac8d22acbf0be98ed6534bd} of the agency’s 66,000 operational workers were taking advantage of the program. Saul gave the employees, many of whom had scheduled child care arrangements around the program, just two weeks to prepare to return to working at Social Security headquarters outside Baltimore.

“His mind was made up that telework wasn’t working,” Ralph de Juliis told me.

Another imperative beginning to work its way through Congress is to improve and modernize Supplemental Security Income. This is a safety-net program serving about 8 million beneficiaries who are very low-income and elderly or have a disability. Although it’s not technically part of Social Security and is funded from general federal revenues instead of the payroll tax, it’s administered by Social Security.

The income standard allows SSI recipients $85 a month in outside earnings and phases out benefits at the rate of $1 in reductions for every $2 in earnings above that. The allowance was set in 1962 for a predecessor program and has never been changed. Had it tracked inflation, it would be $745 a month today.

Saul asserts that he can’t be removed as commissioner until 2025 except for cause. That argument is weak at best, according to legal authorities inside and outside the administration. It’s based on the statutory commissioner’s term of six years, which was established by Congress in 1994 ostensibly to keep the position above the fray of partisan politics.

Things haven’t worked out that way. Over the years, Social Security has often labored under the dead hand of Republican commissioners, an artifact of the happenstance and the six-year term. The last Democratic-appointed commissioner was Kenneth Apfel, who served from 1997 to 2001.

This is just run-of-the-mill GOP pettifogging. Senate Republicans held up confirmation of Barack Obama’s nominee for commissioner, the Social Security veteran Carolyn W. Colvin, for four years, forcing her into the position of acting commissioner and leaving the job open for Trump to fill, as he did with Saul in 2019.

That was political, just like McConnell’s blockade of Obama’s nomination of Merrick Garland (now the U.S. attorney general) to the Supreme Court.

In any case, two Supreme Court decisions since 2020, including one handed down just last month, establish that this sort of tenure protection is what’s unconstitutional. The office of legal counsel of the Department of Justice gave Biden the green light to oust Saul via a 17-page memo on July 8, stating that “the President can remove the SSA Commissioner at will.”

The only remaining question is why Saul wants to keep his job at all. He hasn’t made Social Security more efficient, he hasn’t advocated improving benefits, and he hasn’t shown any inclination to absorb himself in its history or its purpose. He told the Washington Post that he thought he was doing an “excellent job.”

He also said his ouster was “a bolt from the blue.” Yet Saul couldn’t have been unaware that Social Security advocates had been calling for his firing since even before Biden’s inauguration. All that was left to him, in the end, was ideology.