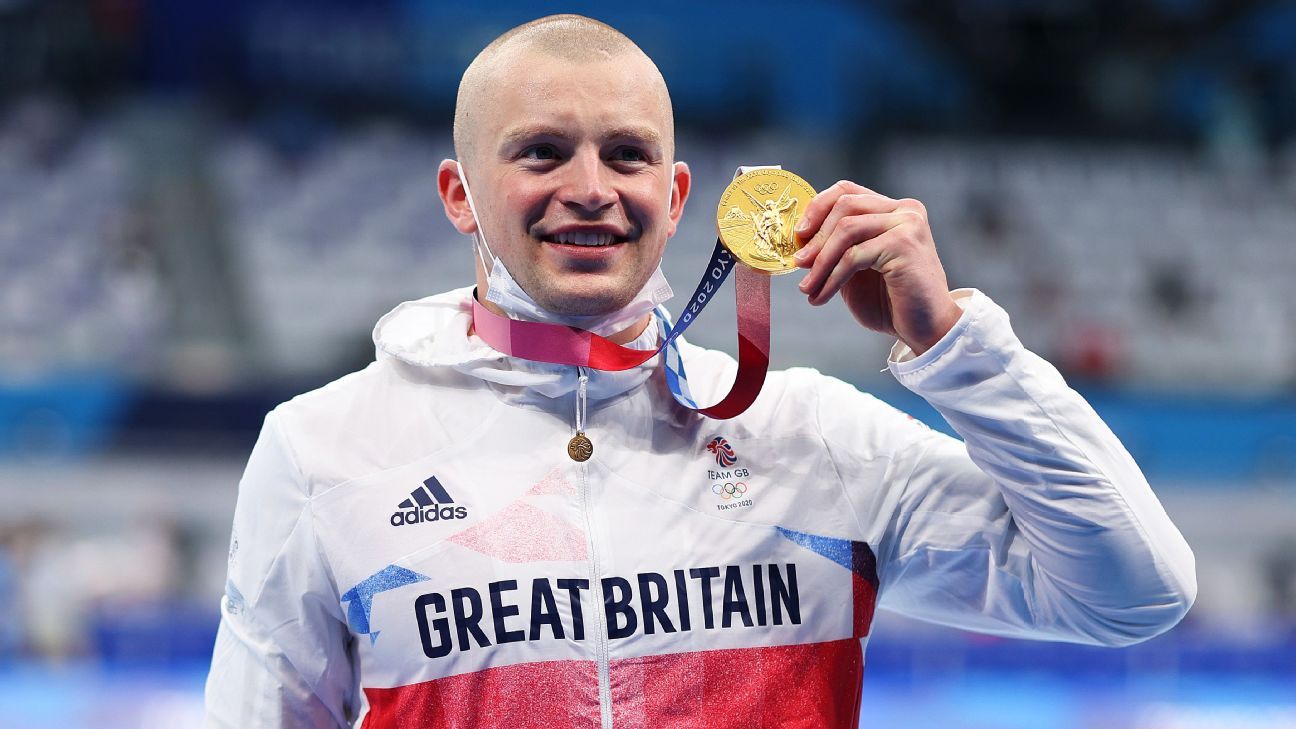 
Adam Peaty roared with pride and relief as the fastest breaststroker in history became the first British swimmer to defend an Olympic title with a dominant 100m win in the Tokyo pool on Monday.

The gold was also his country’s first of the 2020 Games, just as he provided the first at Rio de Janeiro five years previously.

“I haven’t felt this good since 2016,” the 26-year-old world record holder told BBC television before putting the medal around his neck and posing for photographers with the British flag.

“It just means the world to me. I thought I had the best preparation of my life but then you throw in morning finals and you throw all that out the window.”

Peaty was Britain’s banker for gold, as much of a certainty as is possible in an Olympics overshadowed by the COVID-19 pandemic.

He walked out with a swagger, towel around his neck and arms raised with chest puffed out but underneath it all there were still the nerves of a man carrying a nation’s mighty expectations on his back.

Once he hit the water, however, there could never by any doubt. This was re-Peaty all over.

The Briton reached the turn 0.10 off his record and touched out in 57.37 with closest rival Arno Kamminga of the Netherlands taking silver in 58 seconds exactly.

“I did feel a little pressure into the final but it’s a good pressure. I needed to put myself on edge. I needed to go my fastest,” said Peaty, who has a tattoo of a lion on his shoulder.

Kamminga is the only other swimmer to have gone under 58 seconds in the event and Peaty had the fastest 16 swims of all time before Monday’s final but his record of 56.88 was not in danger.

“I’m not racing for a time, I’m racing myself … it’s not about a time its about a race,” said Peaty.

“This has closed a chapter for me. It was unfinished business.

“This victory wasn’t mine. It was the British swimming team, my family, my friends and those people I had to put to the sidelines for the moment because I knew it was going to take absolutely every single bit of energy to get to this point.”

Elsewhere on Monday, Alex Yee continued Britain’s strong pedigree in the triathlon as he took silver, finishing behind Kristian Blummenfelt of Norway.

“It hasn’t really sunk in quite yet, it doesn’t feel real like it’s me yet,” Yee said.

“I still feel like a normal boy from south east London. I hope I can serve as an inspiration to people to show this is possible. I’m not anything special, I just really enjoy sport and have been really lucky.”

The Brownlee brothers had long dominated the sport with Alastair winning gold at London and Rio, and his brother Jonny taking bronze and then silver, but while Jonny finished fifth at Tokyo, Yee secured his status as the heir with a brilliant performance.

“It was brilliant for him to race so well. There’s another life in him, he’s been really good in training. It’s hard to say what those guys will do.

“All I’d say is that legends never die. They’ve created a legacy for our sport. Triathlon wasn’t what it was before they started. Now it’s got the platform that it’s on and I hope I can do the same for the sport.”

A brace from Liam Ansell saw Great Britain’s men’s hockey team beat Canada 3-1 for their second win of the Olympics.

The opening goal was scored by Ansell just after halftime with an assist from Sam Ward.

Ward then doubled GB’s lead from a penalty corner before Canada pulled one back through Floris van Son.

Ansell was on hand, however, to add a third and secure the win with just four minutes remaining on the clock.

“It was a big three points for us,” Ansell said. “We knew coming into this game we wanted to leave a mark on the game and dominate the ball, keep a lot of possession and make them run — and hopefully by the end of the game that would tire them out and allow us to score those goals.

“We’re always trying to improve — we’ll look back at this game and see what we can improve straight away for tomorrow [against Germany].

“We want to win every game — you never want to lose or draw, you go out to win. Our focus is on the next three games — they’re tough opponents but we’ve beaten them in the past and we want to do that again.

“We want to finish top of the group and keep that momentum going.”

The men’s rugby sevens team, who won silver in Rio, also had a successful start to their tournament, beating Canada 24-0 and Japan 34-0 in their first Pool B matches.

Two tries from Dan Norton were the backbone of a match which saw the North Americans fail to score and there were six tries in GB’s convincing win against the hosts, including one from captain Tom Mitchell.

*Information from Reuters was also used in this article